The L.A. Food Truck: A True Representation of American Cuisine 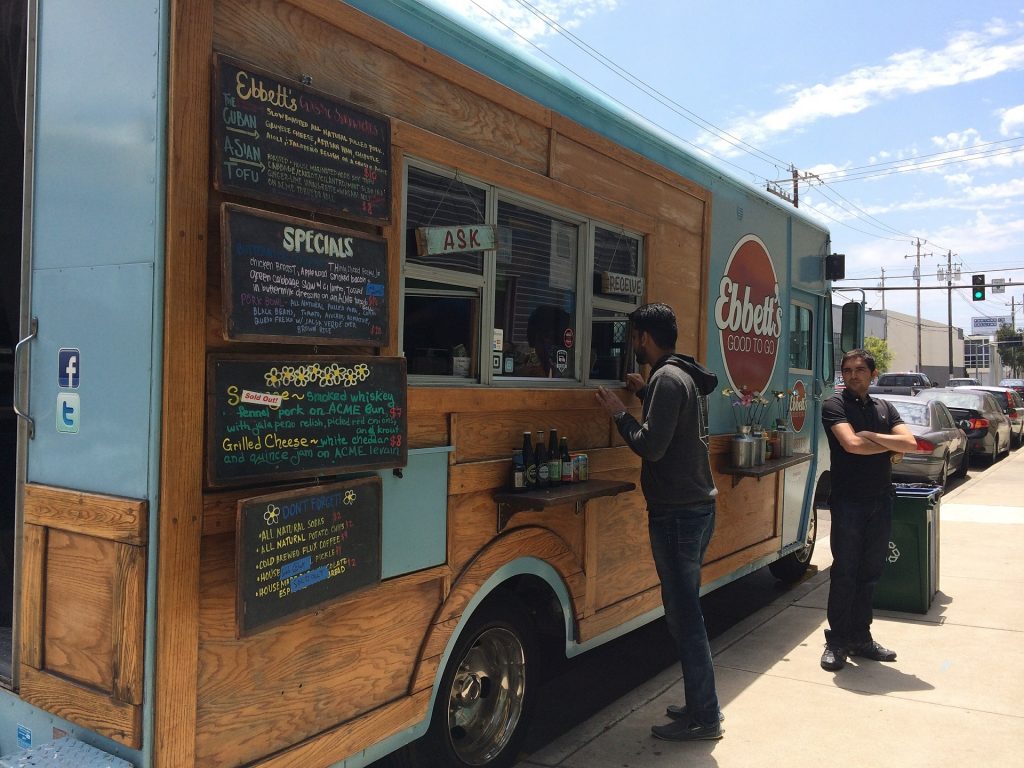 In the haute cuisine world, mention “American” cuisine and you’ll get sneers and side glances, with people often predictably falling into two main camps of opinion: one, that America doesn’t have a cuisine of its own, or two, that its cuisine consists mainly of disgusting fast food that is barely safe enough to ingest.

Of course, over time, the culinary world has been taken on by avant-garde chefs who are trying to bring “real” American cuisine into the fore, and into the annals of great cuisines like French or Italian. Whether it’s reinventing Americana cuisine from the Appalachians to celebrating the cross-cultural diversity of America’s rich immigrant culture, American cuisine is becoming a thing in and of itself, represented in its completion by the food truck scene.

Around the country, the food truck scene is strongest in L.A., with its thousands of independent food trucks plying the streets of the City of Angels to feed the hungry millions American or Americanized immigrant food from around the world. Whether it’s upper-class hipsters looking for the trendiest lunch spots in Beverly Hills to feeding working class folk in East L.A., food trucks endure because they reach all strata of society and uniting America with food.

A Brief History of Food Trucks in America

Contrary to popular belief, food trucks have been around since the first European immigrants arrived in the New World. For as long as street food and mobile dining have been around (since at least the 17th century), so have an iteration of the food truck.

Evidence of food trucks in the colonial times appears in the form of legislation from 1691, when city officials of New Amsterdam, a.k.a New York City, began issuing various types of legislative orders to regulate street vendors and where they could sell food from their push carts.

By the 1850’s, train travel had become the main mode of transportation between coastal cities, which meant that passengers could take trains from New York to San Francisco, which also meant that food needed to be served on these trains. Hence, the birth of the dining car.

While the upper crust were busy riding trains, the rest of the people were still using wagons to cross the Great Plains. In 1866, Charles Goodnight, Cattle rancher and father of the Texas Panhandle, created the Chuckwagon, a roving wagon that was originally used to keep ranchers and drovers in his property fed as they trailed, but was then offered up to other people crossing into the West.

This became an important part of the Old West, and by the 1870’s, the concept of a diner, a mobile restaurant that offered quick and inexpensive meals, became integral in feeding the burgeoning populace of the newly-occupied Western coast. By 1872, Walter Scott took the idea and started selling food out of a horse-pulled wagon, today considered to be the first diner.

By 1894, entrepreneurs took the idea of selling food from a mobile station to schools, with sausage vendors beginning to offer their products to student dormitories in Yale, Cornell, Princeton, and Harvard. These vendors and their carts quickly became known as ‘dog wagons’.

But it wasn’t just the private sector that started seeing the benefits of mobile dining; by 1917, the US Army introduced the field kitchen: mobile canteens and diners that they use to feed troops in the front lines of World War 1.

Fast forward to the 1950’s, and the world’s first ice cream trucks start plying the streets of the country, quickly becoming a cultural icon and a favorite of America’s children. Not 10 years later, during the early 60’s, roach coaches, a slang for trucks and vans outfitted to become mobile kitchens, start becoming prevalent in many construction sites.

Roach coaches became so popular that in 1974, Raul Martinez, Sr. converted an old ice cream truck and turned into the world’s very first taco truck. This taco truck soon became King Taco, one of the country’s most popular and endearing taco chain restaurants. Raul Martinez parked the first King Taco outside of an East L.A. bar, arguably starting the L.A. food truck scene, and the rest, as they say, is history.

From these Roach Coaches and King Taco, the modern food truck was born. Over time, more and more taco trucks (as they were first called) started popping up in and around the city, and by the 2000’s, had started offering more than just tacos: sushi, artisanal ice cream, gyros, and a host of other ‘fad’ cuisines became standard fare for L.A.’s food trucks.

During the 80’s and early 90’s, food trucks were shunned by the haute couture, seeing it as dirty, unhygienic, and simply not-delicious food. This gave the food truck its negative image as being pedestrian food that offered little value to people of sophistication.

However, that all changed when food trucks started offering gourmet food sometime in the early 00’s. By 2009, it not only became a trendy place to eat, it also became an important outlet for aspiring chefs looking to build their name or for experienced cooks looking to start a business outside of their brick-and-mortar restaurants.

With the advent of various apps and with the help of Twitter, pop-up gourmet food trucks are becoming more accessible, with their location at any given point being tracked by loyal customers.

The City of Food Trucks

Beyond the glitz, glamour, and arguably overpriced Beverly Hills lunch spots and bistros, L.A. has an even richer food scene, thanks to the food truck. As one of the first ports of entry for many immigrants coming in from Asia, Los Angeles was primed from its birth to become a melting pot of cultures, peoples, and most importantly, food.

In fact, one of the hottest food trucks in the city right now is Kogi, a Korean-American food truck that serves fusion treats like Kimchi dogs, Korean short-rib tacos, and other east-meets-west dishes. But Kogi is just one (albeit a shining) example of how L.A.’s food truck scene has become a haven for those looking for “real” American food. Consider the top 5 food trucks in Beverly Hills according to Yelp:

It’s clear that L.A. is reliant on its immigrant-rich history and population for its tastes, but is it isolated? Consider the top 3 food trucks in the U.S.A. according to MSN.com:

It begs the question: what is American food? Well, I like to think that American food is simply food that was developed in America. Like most things, any dish brought over from a different part of the world will be localized; the moment that “-American” is suffixed to an ethnicity, and you can be sure that their food will also be Americanized –Asian food might have its pungency toned down, European food might get a kick of spice, Mexican food might have its fired calmed down –basically creating food that is kind-of-like-that-dish-but-not-quite.